This entry by Martin Franklin Hanley in his "Day Book" noted the beginning of construction of the Hanley House which would serve as the home of his descendants until its acquisition by the City of Clayton in 1968.

Listed in the National Register of Historical Places, the Hanley House is one of the few farm houses which have been preserved and restored in the midst of a thriving urban community. Indeed many of the largest commercial and corporate buildings in the midwest are visible from its balconies.

Nevertheless, the restoration of the Hanley House is more that the preservation of the oldest building in Clayton. It provides a window in time through which we can view the life style of a Missouri farm family during the period between the Civil War and the "Gay Nineties."

Martin Hanley, farmer, blacksmith, merchant, grocer, tavern keeper, Justice of the Peace, and land holder was born on August 4, 1814 in Virginia and died at the age of 65. He was the father of 11 children, seven girls and four boys, ten of whom grew up in the Hanley House and helped with chores on the 100 acre Hanley farm.

His wife, Cyrene Clemens Walton Hanley, was born March 3, 1819 in Missouri and died at the age of 75. She traced her ancestry back to the Terrills who fled Scotland in search of freedom and continued as rebels against British Colonial rule in the New World. An antecedent of Mrs. Hanley's, the Reverend Thomas R. Musick, was among the first Protestants to preach west of the Mississippi when St. Louis County was still under Spanish rule and the Mississippi River constituted the western boundary of the United States.

A slave owner, and one who occasionally employed additional slave labor, Martin Hanley and his family's allegiance was to the Confederacy although they seemed to have taken no active part in the Civil War.

Martin Hanley purchased his farm on June 5, 1847 from William Wyatt for $750. The Hanley farm adjoined the farm of Ralph Clayton for whom the City is named. To help establish the County Seat of Government at Clayton, the Hanleys and Ralph Clayton made a donation of land totaling more than 104 acres, of which just over four acres belonged to Hanley.

The Hanley House was frequently in and out of mortgage while Martin Hanley was alive as well as after his death. In 1870, according to real estate records, Hanley also controlled 652 acres in St. Charles County which were heavily mortgaged.

The Hanley House grounds typify a Missouri farm of the period from 1855 to 1894. Most plantings are native to St. Louis County, and those added have been planted in accordance with period photographs of the Hanley House.

The enormous black oak in the front yard is a State Champion Tree, accredited by the Missouri Department of Conservation as the largest black oak in Missouri. It measures 15 feet in circumference and is estimated to be 300 years old. During the Nation's Bicentennial in 1976, it was designated as the Clayton Liberty Tree.

The building is typical of Greek-Revival houses which were built on many Missouri farms in the pre-Civil War period. The Hanley House is constructed of rose-pink brick with outside trim of blue-green, the color duplicating that used in the nineties. It is an eight-room, two-story house with front and back porches on both floors. The two-story portico on the front of the house is a handsome architectural feature, typical of the period in which the house was built.

All of the furnishings date from the 19th Century. Much of the furniture was in the house at the time it was purchased by the City, and has been cleaned, repaired and re-covered where necessary. A few additional pieces have been added either through gifts or purchase to complete the rooms.

Restoration of the interior decorating was carefully researched for authenticity. The oak graining of the upstairs hall doors and in the dining room is original. Other colors were restored only after careful analysis of paint layers found on the woodwork. The wallpaper in the parlors and in one bedroom duplicates the 1890 wallpaper originally on the walls. Other rooms have wallpaper resembling that found on the walls during refurbishing.

The restoration process is a continuous one. As more facts are discovered, additional restoration is made. An example is the recent return of a large Staffordshire earthenware platter, circa 1800, to the Hanley House from the St. Louis Art Museum. The piece is believed to have been handed down from Miss Barbara Yore, granddaughter of Martin Hanley, and the last Hanley descendant to live in the house, presented it to the Art Museum.

THE STORY OF THE RESTORATION

The effort to preserve and restore the Hanley House began with the awareness of its historic importance by a civic-minded citizen who brought the historic significance of the Hanley House to the attention of City officials.

A number of years later when the possibility arose that the Hanley House could be purchased by the City, action was swiftly taken by Clayton officials, Mayor Hy Waltuch and the Board of Aldermen. In April 23, 1968, the City purchased the Hanley House property.

A Hanley House committee, appointed by the Clayton Board of Aldermen and headed by civic leader Roy W. Jordan, accepted responsibility for guiding the City's restoration of the Hanley House, and a careful three-year process began. Emphasis was placed on assuring the authenticity of the restoration.

The City gratefully acknowledges the efforts of Charles Van Ravenswaay, former director of the Missouri Historical Society and now director emeritus of the Winterthur Museum, who served as chief consultant for restoration of the Hanley House. 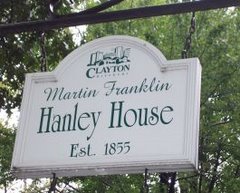